To experience the performance of musicians who combine the sparkle and vigour of youth with exceptional ability makes for a special occasion and Cockermouth Music Society’s recent concert, supported by the Countess of Munster Musical Trust, was remarkable by any standards. Adelia Myslov is a violinist who exudes confidence and poise combined with a natural musicianship which is impressive. Here she was joined by Craig White, an accompanist who knows how to accompany, in the best sense of the word. Adelia began with a solo Passacaglia by Biber which displayed the qualities of her violin beautifully. The Franck Sonata in A major for violin & piano which followed was a bravura performance by both players of a piece which can be played in many different ways – here it had conviction and power, although some might prefer to savour the beauties of the last movement at a slightly slower pace. The Devil’s Trill Sonata by Tartini was played with great panache, bringing out all the bright innovation of one of the composer’s best works. Adelia’s ability to switch from one style to another was well demonstrated in her playing of Debussy’s Sonata in G minor for violin and piano (the accompanist being particularly sensitive to the gorgeous harmonies given to the two instruments). The final work, Bizet’s Carmen Fantasy (arranged by Sarasate) with all the virtuoso intricacies of the music taken at breakneck speed and with apparent ease, was an exciting tour de force and a fitting end to a great evening of music making. 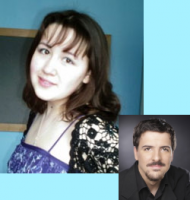