Wind and snow made a determined but fortunately short lived attempt to disrupt the audience’s arrival for the Artington Quartet’s January concert for Cockermouth Music Society, but the undeterred were treated to a riveting performance of quartets by Beethoven, Borodin and Shostakovitch. Beethoven’s Quartet in G (Op 18 No 2) opened in Haydnesque fashion but finished as pure “unbuttoned” Beethoven, introducing us to a ensemble who have superb control of dynamics and timing combined with instinctive feel for the direction of the music. Borodin’s Second Quartet followed with its lyrical tunefulness , particularly striking at one point in the First Violinist’s solo rendition of the famous tune from Kismet. Every member of the quartet contributed to the group’s masterly sense of ensemble as well as having their own moments in which to shine.

A surprise awaited us at the beginning of the second half with the appearance of twelve year old Georgina Allison-Lett who played the Allemande from J S Bach’s Cello Suite in G with great style and fine sonority. Then came Shostakovitch’s great Quartet No 8 in C minor which held everyone spell bound. Full of anguished intensity, dramatic excitement including a Jewish theme hurled at us with wild emotion, the quartet finally passes into a sea of despair, loss of hope, resignation, but the serene beauty of the music was always tremendously moving. Malcolm Allison and Catherine Lett(violins) worked together and separately to give us first class violin sound, Emily Frith’s viola sang with that special middle-range mellowness and underlying it all was the gorgeous resonant depth of Miriam Lowbury’s cello playing. The audience loved the encore, a jazzy rollicking version of “It don’t mean a thing if it aint got that swing,”which sent us on our way rejoicing. 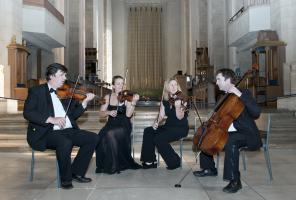