“Sweet Swan of Avon” came to Cockermouth’s Christchurch for a concert promoted by Cockermouth Music Society in association with Orchestras Live, a charitable organization who give much valuable support for the performance of classical music in concerts all over the country. The Orchestra of the Swan (Stratford’s own orchestra) with their Artistic Director David Curtis gave a much appreciated performance for a large audience, who were much intrigued on discovering that the concert was being broadcast live on Radio 3.Led by violinist David Le Page, the concert began with Britten’s Young Apollo, where we were introduced to composer and pianist Huw Watkins, who is currently the orchestra’s Composer in the House. Indeed you could say it was Huw ‘s night, as this unassuming and gifted musician not only played twice in the first half, but also had his Little Symphony played in the second. Young Apollo was full of brilliant piano sound ably backed up by the orchestra’s strings and the Mozart Piano Concerto No 19 K459 which followed was full of joyous interpretation from soloist and orchestra alike. Huw’s Little Symphony (2013) proved to be a lyrical and expansive piece, very “English” in sound, and beautifully handled by the orchestra, all sections having a chance to shine. Schubert’s Symphony No 5 was a wonderful finale, great music allied with the full rich sound this orchestra can produce seemingly at will. This was a great occasion for the music lovers of Cumbria and beyond and thanks are due to everyone who helped to make it a memorable evening. 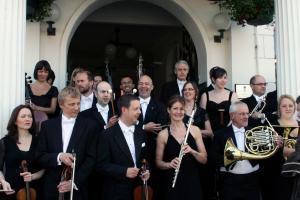