The return of Nicholas Daniel,”formidable virtuoso” and promoter of the cause of classical music, with pianist Charles Owen, was welcomed by a delighted audience at Cockermouth Music Society’s December concert. Their programme opened and closed with Bach Sonatas, beautifully performed by both musicians, and also included some demanding music for both players and listeners. Thea Musgrave’s Night Windows is carefully crafted and remarkable for its intensity, Daniel and Owen well able to convey its moods, and the Pavel Haas Suite, mirroring the feelings of the Czech people during the Second World War, is not easy listening but nonetheless gripping. Schumann and York Bowen pieces in the hands of two master musicians contrasted well, with their beauty of expression well to the fore. Nicholas Daniel spoke well and amusingly between pieces. The audience appreciated the visit of these great players who gave an emotional encore of great beauty, “Gabriel’s Oboe” by Ennio Morricone, to conclude the concert. 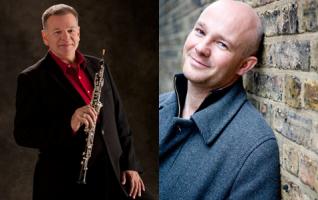