There was a strong sense of anticipation in the air when an audience containing many wind players assembled for Cockermouth Music Society’s October concert given by Souza Winds. The wind repertoire is mainly very modern so that some of its music might not be to everyone’s taste, but there was no doubting the quality of the performance given by these five wonderful wind musicians. Three Pieces by Ibert opened the proceedings, showing the composer’s sure understanding of how to write engaging wind music and using the clear tones of the flute (Carla Sousa) clarinet (Lucy Rugman) and oboe (David Benfield) to contrast with the sonorities of bassoon (Lucy Keyes) and horn (Jonathan Harris). Holst’s Quintet was performed with impressive control of what is difficult music and was followed by Berio’s Opus Number Zoo, a curious mixture of music and words which the group managed admirably. Richard Rodney Bennett’s Travel Notes 2, contrasting means of transport, were charming and then came Malcolm Arnold’s Three Sea Shanties with their bursts of manic excitement centred on well known sea songs which seem to fly off the page from the pen of an anarchic whisky-fuelled genius. Nielsen’s Wind Quintet is one of the highlights of the wind repertoire, giving all players solo moments in which to shine. Happiness was in the air as joyful chatting broke out amongst the departing audience, showing their appreciation of a good evening’s entertainment. 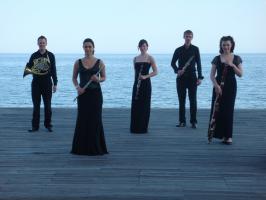