Fifty young musicians performed in front of a large audience of their teachers, parents, supporters and society members at the annual Young People’s Concert organised by Cockermouth Music Society. Performers were mainly drawn from all year groups at Cockermouth Secondary School. The concert was held at the United Reformed Church, Cockermouth, on Tuesday, 25 February. Altogether about 30 pieces were performed during 80-90 minutes of music.

Part of the Society’s work is to provide a platform for young musicians to experience performing in front of an audience. We work with local music teachers and schools to put the programme together.

Singers were well represented in a varied and interesting programme which included music of different styles from traditional and popular song, through Jazz to the classical repertoire. There were violin, saxophone, trumpet, French horn, oboe, flute and piano solos.

Three choirs from the school took part and one of them, the over 16 choir, provided an encore from the musical being staged at the school at the time.

Students commented on the relaxed, friendly and supportive concert atmosphere. They liked the experience of being able to listen to other people’s performances and would come back to perform at next year’s event. 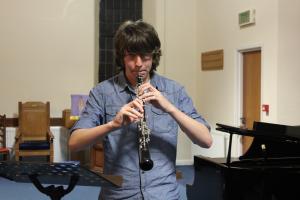