This concert, an annual fixture in our calendar, provides young people with an opportunity to perform in public to an audience willing them to succeed. All the chairs in the URC were put out in order to accommodate over 40 performers drawn from local schools plus an audience of supporters and Music Society members. Cockermouth School were very well represented and there were musicians from several primaries, All Saints’, Brigham, Fairfield and Paddle, as well as other secondaries, namely St Benedict’s, Whitehaven, and Keswick. 16 of the 40 items involved male and female singers, either as soloists or in small choirs. On the instrumental side there were saxophones, a trombone, clarinet, cornet, flutes, guitar, violins and piano. Classical, Jazz, Blues, Ragtime and songs from the shows made up a rich and varied programme. Special mention has to be made of Meghan Avery’s flute playing; her interpretations of Tambourin by Gossec, accompanied on the piano, and Synrinx by Debussy for solo flute were superb. From 8 to 18 years of age, everyone gave of their best and we could not have asked for a more entertaining evening. Perhaps we could draw in more Music Society members at next year’s concert on March 22, 2016. 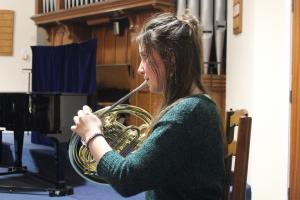